I am sorry for the late timing, but I thought some words were needed to address the firstInternational Day of Forests and the 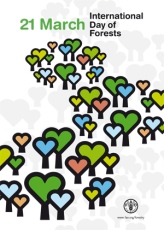 Tree, which was held yesterday after a UN December resolution declared that 21 March of every year was to observed as an occasion to “celebrate and raise awareness of the importance of all types of forests and trees outside forests“. Apart from the consideration that international occurrences may or may not be pivotal in achieving the goals they are concerned with, depending on countries’ willingness to commit to tackling the issues that have been raised, it should not be unfair to say that the recognition of the value of forest ecosystems and the services that they provide brings up one the biggest and most evocative challenges the human race and the planet are facing today. Forests are not only the core of the earth’s biosphere and the cornerstone of life, functioning as soil conservers, climate change regulators, primary producers, hydrologic flow modulators, habitats for wild species and holders of about 90% of the world’s terrestrial biodiversity; in fact, their history is inextricably linked to mankind’s one, and mankind’s biological (but also anthropological) evolution has developed in strong connection with them. On one hand, forests still host roughly 2,000 indigenous cultures which deserve respect and the right to be held keepers of their environment (not to mention the need for us to leave them alone, recognizing their will for an autonomous model of development, that be really their own); on the other, they have accompanied human progress throughout time, providing man with a (seemingly) never ending source of food, building materials, heating sources, shelter and a (truly) never ending source of thought and mysterious fascination.

This is what strikes me the most about forests. Nearly everything that could have been said on the ecological, social and economical crisis that we may expect if we keep on destroying these ecosystems for livestock breeding, indiscriminate agriculture, paper, timber and so on is contained in the brilliant message that UN Secretary-General Ban Ki-Moon has delivered yesterday (and that can be read here). But there is much more than that. There is, at least in me (and I hope in many), a deep sense of belonging, even though I never lived within close range of a ‘forest’; there is a sense of moral connection, of our shared place ‘in the family of things’, as Mary Oliver once put it; there is, finally, a sense of mutual relationship which has helped (and continues to) shape the world and our very same spirit, in the meantime.

This is especially evident in those indigenous cultures, to which I pointed earlier, that have retained and nurtured their likeness to the nature that surrounds them: without trees and forests, they simply wouldn’t exist, and not just because they would 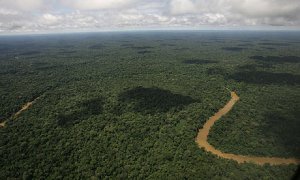 have developed another type of civilization, but especially because they would have lost their identity. However, it is not exclusive of them. Through the centuries, there have been men who have worshipped forests and protected them, by words or by action, from destruction; and they have done so for more than their beauty, and surely for more than that (sometimes) emotionless adhesion people express for a cause which is being put forward by an NGO they donate to. What these men (think of John Muir, for instance) pursued was not the somehow egoistic goal of defending their primary mean of survival and existence (and that especially because in the nineteenth century no one could even imagine mankind facing the global challenges we need to address today); what they pursued was the recognition of us and the forests being part of the common tissue of life, a tissue which encompasses a ‘give and take’ mentality (and not a ‘Giving Tree’ mentality) but which also goes beyond physical interactions to penetrate the very heart of human history on this planet earth, and they did so because they understood that “in wildness is the preservation of the world”.

(from The Maine Woods, Chesuncook – by Henry David Thoreau)

“Strange that so few ever come to the woods to see how the pine lives and grows and spires, lifting its evergreen arms to the light, — to see its perfect success; but most are content to behold it in the shape of many broad boards brought to market, and deem that its true success! But the pine is no more lumber than man is, and to be made into boards and houses is no more its true and highest use than the truest use of a man is to be cut down and made into manure. There is a higher law affecting our relation to pines as well as to men. A pine cut down, a dead pine, is no more a pine than a dead human carcass is a man. Can he who has discovered only some of the values of whalebone and whale oil be said to have discovered the true use of the whale? Can he who slays the elephant for his ivory be said to have “seen the elephant”? These are petty and accidental uses; just as if a stronger race were to kill us in order to make buttons and flageolets of our bones; for everything may serve a lower as well as a higher use. Every creature is better alive than dead, men and moose and pine-trees, and he who understands it aright will rather preserve its life than destroy it.’